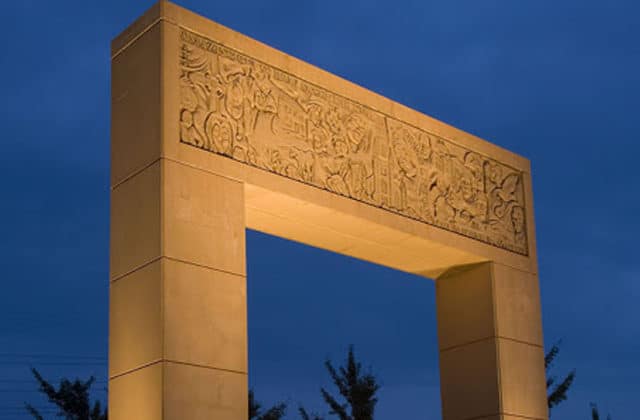 To appreciate and understand the appeal of Ballantyne homes, you need to remember three things: It’s new. It’s upscale. And it has its monuments.

Unlike Charlotte’s other major communities, Ballantyne homes and neighborhoods were born within the memory of most of the people who live there. Before the mid-1990s, it was largely farmland. When it was developed as a retail and residential project, its developers commissioned monuments that reflected the history of the area. It’s appropriate that the Ballantyne Monuments celebrate the Charlotte region’s heritage as a center of growth and change. One of the large carvings at Johnston Road and Ballantyne Commons features Cameron Morrison, the “Good Roads” governor of the 1920s; the Wright Brothers’ plane; the old Charlotte train station; and Charlotte’s first trolley. On the opposite corner is a monument decorated with symbols of technology and commerce.

Yes, it’s all about movement, commerce, and discovery. For Ballantyne homes, it’s about reinventing oneself and going large. That’s a fitting symbol for an area that now boasts the 500 + acre Ballantyne Corporate Park, four major shopping centers, and the headquarters of several relocated corporations, including Snyders-Lance, Extended Stay America, and ESPN regional television.

With its country club, dozens of upscale housing communities, and access to Charlotte’s I-485 outer belt, the Ballantyne area has grown into a mini-city with a brash and independent spirit. Find the Ballanyne homes for sale below:

Julie P. Tuggle is broker/owner of Carolina Buyer's Agent, one of the only real estate firms in the area that doesn't practice "Dual” or “Designated” agency - the conflict of interest that exists when a buyer agent's company is representing the buyer and the seller on the same home. Carolina Buyer's Agent specializes in Home BUYER Representation Only.

At Carolina Buyers Agent, search the full range of Charlotte NC homes for sale: MLS Listings, For-Sale-By-Owner, Foreclosures, & Senior Housing, too. Search for homes from your desktop or smartphone by area, neighborhood, address/ZIP, school or even commuting distance to work!
Let's Work
Together
Contact Us Today